This week I’ve been pondering pop culture.  Several things are swirling around my head in a hodgepodge, so that’s how they’ll appear here.

I read Suzanne Collins’ terrifying (albeit thrilling) YA novel The Hunger Games (and Catching Fire and Mockingjay) over about four days last summer.  Since it has been made into a movie (that opened yesterday), I have been revisiting the story, which I’d for the most part filed away.  (I had recently discussed it in depth with my mother because I mailed her the set of books, and like me, she read them fast and furiously over just a few short days.) What struck me about the book (and the second and third installments of the trilogy) was my sense of deja vu about  this “future” country that is much like a fun house image of the United States.  The author deftly mentions the notion of keeping the populace compliant and controlled through the use of bread and circuses.  The Hunger Games reveals a society that views sanctioned murder of its young as a form of gladiator-esque entertainment.  12 fenced, largely impoverished  “Districts” surround the insulated, tomorrow land of the Capitol City, a place that controls everyone in every district through the use of hunger, fear, intimidation, and the very real threat of violence and death.   The aptly named Hunger Games — the annual televised slaughter of 23 of 24 “pledges” that must fight to the death feels eerily familiar. Two children between the ages of 12 and 18 from every district except the Capitol City are chosen by lottery to fight each other.   This carnage is considered entertaining by the vapid population of the Capitol City.  It is an event!    The books trace the story of Katniss Everdeen and Peeta Mellark as they are chosen from District 12 to represent the poorest, hungriest district in the games.  They are both seen as goners once they’ve been pledged.  No one in District 12 has come out of the games alive in years.  But there’s a twist.  Malark is in love with Everdeen.  This proves intoxicating for the audience, and Katniss plays along.  To survive, she plays along.  Although it’s cruel to Peeta, she simply wants to survive to make it back to her mother and sister — and the boy she’s in love with — Gale.  She’s the hunter in the family.  She’s the one keeping them going since her father died in the mines.  It is crucial in her mind that she get back home, even if it means killing all her competitors.  The books are relentless in the horror of the violence — and the callousness of a society that revels in that violence.  They were written as young adult novels — and teens everywhere have devoured them. Collins has sold over 9 million copies of these books — and they have been read widely by adults and children alike.  What I wonder is — does the underbelly — the symbolism and the “knife in the throat” aspect of these books reach the audience?  Or, are they (we) simply entertained? 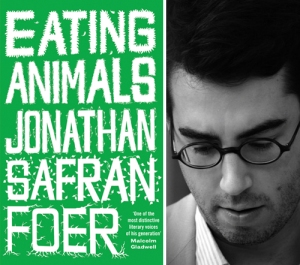 My mom and I spent quite a while discussing Jonathan Safran Foer’s expose on factory farming in the US (and the rest of the world), Eating Animals, last weekend, so this book has been on my mind even though I haven’t read it yet.  I’ve been thinking about the ethics of eating animals and the trouble I have with the (generally) unconscious attitude most of us have about the effect that our actions and choices have on the larger world.  I admit, I like eating meat.  However, I don’t like eating fast food (except Chipotle — which uses compassionately raised meat and local organic ingredients) and I don’t like eating food that has come from the factory farm.  I am trying to reconcile how I can live and eat in this strange, ghoulish new world we currently live in, and not feel sick about it.

There is no reason for the existence of the “factory farm” model other than pure, unadulterated greed.

This is the idea behind factory farming.  Let’s cram as many chickens/cows/pigs/turkeys/fish into as small as space as possible, throw offal at them and call it food (going so far as to even serve them the remains of their brethren who didn’t make it through to the conventional slaughtering process) and then display the results in plastic wrap, labeling it “Look what’s for dinner!” Let’s fill it with hormones and antibiotics, showcase it under florescent lights with campy Muzak playing in the background, and make people believe it is food.  In addition, let’s make sure we hire only people who thrive on cruelty to work on these so-called farms.  Yikes!

Really makes you want to pick up a fork and dig in, doesn’t it?  So, in the end, I circle back to realization that I am waking up and I need to make some changes. First and foremost among them – a change in attitude (and gratitude) when it comes to what reaches my table in order to sustain my life.  For quite a while now I have bought only organic meat, eggs, dairy.  That is the way I’ve settled my upset with the way that animals raised to be our food are treated.  My mother has decided to become a vegetarian, at the age of 77.  After reading Safran Foer’s book (and leading a discussion of it this past week for her book club) she said she cannot return to “business as usual.”  After our discussion, neither can I. 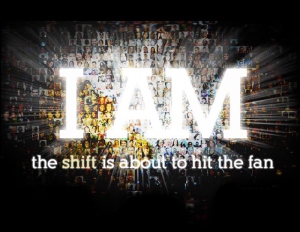 “What’s wrong with the world? And what can we do about it?”

Tom Shadyac’s documentary (director of Ace Ventura Pet Detective, Liar, Liar, and Bruce Almighty), I AM, is both personal and planetary in scope.  He made drastic changes in his lifestyle because of a biking accident that left him in chronic pain, to the point of nearly committing suicide. He started to see the western mode of constant consumerism (buying more and more and more stuff) as sick, and sought out many great philosophical and spiritual thinkers asking them, “What’s wrong with the world? And what can we do about it?”  The film is a beautiful valentine toward the idea of building a more thoughtful, cooperative, sustainable future.

That brings me to the final documentary that I have been pondering this week, Daniel Pinchbeck’s, 2012: Time for Change.  I stumbled across this on Netflix this week and loved it.  It encouraged me to see so many people thinking about ways to live that are inherently sustainable and kind.  Rather than seeing 2012 as some sort of frightening doomsday, the film cultivates the notion that we can change, and we can cultivate a different, richer, more meaningful way of life.  You can see the film on streaming video through Netflix or purchase access to it on YouTube for $3.99.

Both of these films are definitely worth seeing.  My ramblings come to a close. Happy Spring!

Feel free to share this post with others, as long as you include the copyright information and keep the whole posting intact.

Go howl at the full moon. 🌕
Cozying up my room for fall/winter. Johanna quilt and bird sheets from Garnet Hill. Pillows via Target.
❤
What you perceive, you receive.
Word. I am teaching myself Adobe Illustrator and Premier Pro.
Fall colors. #lasacequiaspark